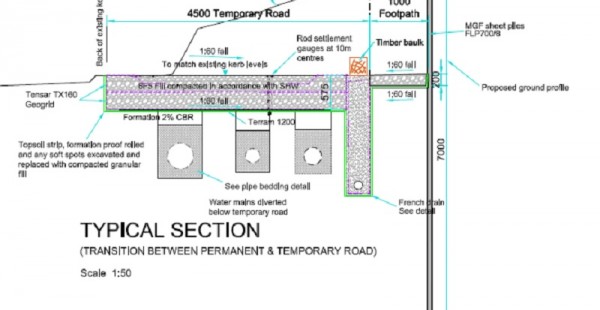 An existing access road to the Piethorne Water Treatment Works had started to fail, and tension cracks were observed in the road surface. PaSCoE were commissioned by Eric Wright Civil Engineering to design a temporary access track to maintain access for deliveries to the Piethorne & Wickenhall Water Treatment Works. The intention was for the temporary road to be installed whilst United Utilities investigated the options for a permanent solution (bored pile anchored wall).

Site investigation during the initial mobilising works revealed that the probable cause of the failure was high ground water level, further exacerbated by a damaged culvert which ran beneath the road. Our role was therefore expanded to include the design of an effective drainage scheme to manage the water from the embankment above the road and the design of land drains to reduce ground water levels. Slope stability modelling undertaken by PaSCoE showed that the drainage improvements increased stability. Upon completion of these works further monitoring showed that the slope had stabilised and an expensive bored pile anchored wall was not therefore required.

The works also involved diversion of existing water mains from the threatened road to the temporary road, and PaSCoE designed the required thrust blocks for these mains.

In announcing the winner of the Editor’s Award, Claire Smith said “The approach taken on this scheme resulted in a value engineered solution that cut costs during the design stage and was further revised during the site work through application of the observational method in order to deliver the scheme in time to allow major planned work on the Haweswater Aqueduct to go ahead on time.”